← Book discussion: Dying to Be Me by Anita Moorjani and other NDE reading
Classics review: O Pioneers! by Willa Cather → 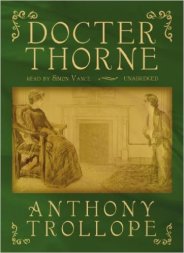 The title character of Doctor Thorne is a humble country doctor, but the author/narrator tells us: “Those who don’t approve of a middle-aged country doctor as a hero, may take the heir of Greshamsbury in his place, and call the book, if it so please them, ‘The loves and adventures of Francis Newbold Gresham the younger.’” Dr. Thomas Thorne is descended from an old and respected family and is a distant relation of the Thornes of Ullathorne, a highly respected family in the region. However, his particular branch of the family has fallen to a low rung on the social ladder.

Family pedigree, or what they call “blood” or “birth”, figures prominently in this novel as it does in all of Trollope’s novels. In Doctor Thorne some of the characters are absolutely obsessed with it. As an American whose family history prior to my grandparents fades into sepia-colored rumors of trips across the Atlantic from the vague mists of Eastern Europe, this obsession with ancestry is an alien and mysterious concept to me. But I am always fascinated by it. I feel sure that the whole family connection thing has moved history along in ways I have not yet realized.

This doctor has a ne’er-do-well brother named Henry, a real dissipated wretch. Henry is not in the book long and does not rate deep sympathetic psychological analysis. We are simply assured that he is bad. However the doctor does his best to support and care for his wretched brother. Why one brother turned out so badly while the other became a near Saint we are not told. It is what it is.

Well Henry Thorne seduces a village girl and get her pregnant. When he gets shot to death by the girl’s brother, Dr. Thorne arranges things for the village girl to marry a local tradesman and emigrate to America, adopts her baby girl, and mitigates the sentence of the brother, Roger Scatchard, so that he gets only six years (justifiable homicide, you know….) Dr. Thorne provides for the child, Mary, to be secretly brought up in the country and then sent to school and taught to be a lady. When she is 12 years old she comes to live with her good uncle, after enough time has passed that the villagers do not draw the connection between the scandal and the sweet little niece.

Some modern readers might be annoyed by Trollope’s frequent authorial commentary, but as a writer I love the insight into his novel-writing process. For example:  “I quite feel that an apology is due for beginning a novel with two long dull chapters full of description. I am perfectly aware of the danger of such a course. In so doing I sin against the golden rule which requires us all to put our best foot foremost, the wisdom of which is fully recognised by novelists, myself among the number. It can hardly be expected that any one will consent to go through with a fiction that offers so little of allurement in its first pages; but twist it as I will I cannot do otherwise.”

The main subject of the book, besides the foibles of various kinds of Victorians, is the hypocritical attitude of the Victorian aristocrats toward money. No one is worth the aristocrats’ time unless they have good birth. Until, that is, they need an infusion of money. Then they are eager to marry their son and nephew off to the daughter of a patent medicine huckster. The  patent medicine heiress in this novel is Miss Dunstable, and she is the funniest and most entertaining character I have yet come across in all my Victorian novel reading. Her wealth and therefore desirability for marriage gives her the rare freedom to say anything she wants to say. Therefore she gets to play the role of court jester, loudly pointing out all the hypocrisy with good-natured humor.

The story centers on the Gresham family, the landowning gentry in the village of Greshamsbury. The father, Mr. Francis Gresham starts life with a healthy income but marries young to a rather foolish girl, Lady Arabella, the daughter of the old and very snobbish de Courcy family and then makes some foolish decisions early on which result in getting into debt. Also the couple has 10 children (!), one son and nine daughters. Several of the daughters are sickly and require expensive medical care, and sadly, four of the children eventually die. I understand that dying in childhood was so commonplace in Victorian times that it was almost expected, so apparently this is realistic. The death of the children gets only a paragraph or two in the backstory.

The real action begins with the 21st birthday of Frank Gresham, the son and heir. By this time, the property is heavily mortgaged and the Greshams are on the brink of ruin. The only hope is that young Frank will “marry money.” Accordingly, his mother and aunt, Lady de Courcy, set out to do everything in their power to make that happen. Unfortunately for the family debt situation, but fortunately for our plot, Frank is already in love with his respectable, but penniless neighbor, Mary Thorne. Both Frank and Mary are wonderfully likable characters who grow and change during a four-year span, Frank in particular.

As for Dr. Thorne himself, he is sort of the mechanism that moves things along and smooths things out, the voice of sanity, and the glue that holds the whole plot together. He is also a lovable character, one of those saintly characters you run into in Trollope novels and also occasionally in Dickens, belonging to the species I call the “disinterested scientist.” This character is primarily interested in his “work” – usually science, engineering, medicine, or anything selflessly academic. He always does the right thing because he is never interested in accumulating wealth and is generally not interested in love and marriage until is he is middle-aged or beyond.

Doctor Thorne is the third novel in Chronicles of Barcetshire series, but it has only a tenuous connection with the first two novels, The Warden and Barchester Towers. If you like the laugh-out-loud humor, the penetrating perception of human nature, and the smooth as silk writing of Trollope, you will love this novel.

← Book discussion: Dying to Be Me by Anita Moorjani and other NDE reading
Classics review: O Pioneers! by Willa Cather →

You've reached the Creative Space of Antiguan and Barbudan writer Joanne C. Hillhouse. Welcome. For info on my writing, services, and more, scroll down. If you need to contact me directly, email jhohadli@gmail.com. Sharing with links and credits is fine but unauthorized use and/or duplication of site content without permission is strictly prohibited. For my other blog, go to wadadlipen.wordpress.com

A home for legit sites and recommendations