Book discussion: Dying to Be Me by Anita Moorjani and other NDE reading 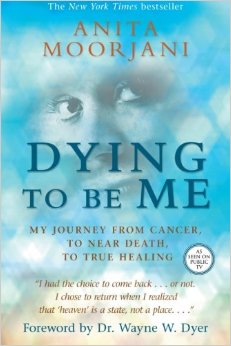 After 22.5 hours immersed in a Noam Chomsky audio book, most of which was about why the human race is in deep trouble, I guess I needed to get out of the pressure cooker of this world and into another one. That’s probably why I subconsciously chose to listen to Dying to Be Me: My Journey From Cancer To Near Death, To True Healing by Anita Moorjani, a book I had never heard of before seeing in on sale, buying it, and finishing it in one day.

The two books are such polar opposites it’s easy to believe my impulsive choice is more than coincidence. Noam Chomsky tells me I am trapped in a doomed world (unless we all quickly organize into international unions….). Anita Moorjani tells me I am not trapped in this world at all; in fact this world is a mere sliver of an infinitely greater reality, barely a cookie crumb on the lavish banquet table of the universe (my words not hers). The way Anita tells her heartfelt story, when she left her body it was as if all her life she had been living in a dark cave with only a flashlight, and suddenly someone flipped the light switch and she could see miles and miles of new things.  Is it my imagination or do I hear echoes of Plato?

Anita  also says that human language is not adequate to describe what she experienced, a message common to every NDE book I have ever read. (While reading this book I realized how many of these I have read over the years, beginning with the granddaddy of them all: Life After Life by Raymond Moody, which I found as a kid in my parents’ Reader’s Digest. It was the featured condensed book.) All NDE stories are amazing, but Anita’s has some elements that are unique and even more compelling than most. She had been battling cancer for four years when her body finally gave out. Her lymphatic system was filled with lemon-sized tumors, her skin was covered with lesions, and she weighed 70 pounds. One day her organs began shutting down and she fell into a coma.

At the hospital the oncologists told her husband and mother that is was over. There were a few things they could still do to make her more comfortable, such as draining the fluid out of her lungs, but she would surely be dead in a matter of hours. Anita says she had left her body by then and heard all the discussion and witnessed the procedures done to her unconscious body. She was able to relate the information later.

During her NDE Anita was given a choice whether to return to her body. She felt she had a mission to help people, so she agreed to come back. Within a few days she was free of cancer. From the brink of death she was talking and laughing with her family within one day. The doctors insisted on testing her for two weeks but could not find the tumors or any sign of cancer. The doctors also thought she would need skin grafting for the lesions, but they quickly healed without the grafting. Within a few weeks she was attending a friend’s wedding.

If you want to know all that Anita found out about the afterlife and the greater reality, I recommend you read the book. The way we process this kind of information is such an individual thing and best told in the words of the person who experienced it directly. Although most NDE stories have some common elements, it seems to me that cultural background and personal experiences influence what the person experiences and how they interpret what they experience.

For example Anita says there is no judgment. That’s right. No. Judgment. Other NDE stories describe meeting people who have been saved from damnation and a few even describe Hell. I can only suppose it is not the same for everybody. It makes me think of the words of Jesus in Matthew 7:2: “For with what judgment you judge, and with what measure you measure, it shall we measured to you again.” If that is true, then I suppose our experience after death will vary according to our attitude about judgment in general.

NDE books have another thing in common: the NDE portion is very short. The rest of the book consists of what led up to the NDE, the aftermath – waking up or coming back, describing it to others, the emotional impact, etc. – and then we always get the person’s interpretation of what it all means, the message.

I was as fascinated by Anita Moorjani’s background as by her NDE. The daughter of Indian parents, she was raised in a traditional Hindu faith. However she never lived in India. Instead she spent most of her childhood in Hong Kong, had a Chinese nanny, and attended English schools, where she says she experienced bullying and exclusion. She wanted to please everybody, especially her parents, but she was not excited about her parents’ plan for her to marry a traditional Indian man and be a traditional Indian wife. After many stressful meetings with prospective mates and one painful broken engagement, Anita finally met her soulmate, an Indian man who shared her values and dreams.

The thing about NDE books is that there is only one witness to the veracity of their story. Often, as in Anita Moorjani’s story, the person can accurately relate information they could not have seen in their unconscious or lifeless state, but we have to take their word for the amazing things they tell us they experienced. I give all these people my belief that they are telling the truth. If I ever found out someone had presented one of these experiences as truth when it was really fiction published to make a buck, I would be very upset about it. Anita Moorjani’s miraculous healing adds substantial weight to the truth of her story.

Other NDE Books I Have Read

Saved by the Light by Dannion Brinkley
Into the Light by Betty Eadie
90 Minutes in Heaven by Dan Piper
My Journey to Heaven by Marvin J. Besteman
My Glimpse of Eternity by Betty Malz
Heaven is for Real by Todd Burpo and Lynn Vincent
Beyond the Darkness: My Near-Death Journey to the Edge of Hell and Back by Angie Fenimore
Proof of Heaven: A Neurosurgeon’s Journey in the Afterlife by Eben Alexander, M.D. (My favorite except for perhaps Dying to Be Me.)

There are many more of these accounts. Amazon lists hundreds of them. My list includes some of the more popular ones.

Note to my classics readers: Next post is about my latest Trollope. I promise.

You've reached the Creative Space of Antiguan and Barbudan writer Joanne C. Hillhouse. Welcome. For info on my writing, services, and more, scroll down. If you need to contact me directly, email jhohadli@gmail.com. Sharing with links and credits is fine but unauthorized use and/or duplication of site content without permission is strictly prohibited. For my other blog, go to wadadlipen.wordpress.com

A home for legit sites and recommendations