← Classics Review: The Warden by Anthony Trollope
How to REALLY have peace on earth → 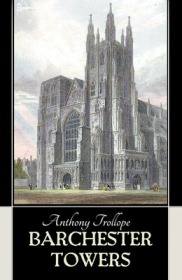 This year, 2015, has been my year of Trollope. I finished reading all of the Palliser series and then went on to the first of the Chronicles of Barsetshire The Warden, which was a delight, and have most recently finished Barchester Towers, which is, as Victorian novels go, practically perfect – especially if you like a good helping of wry humor in your novels. This second novel of the Barsetshire Chronicles has the added benefit that we are familiar with the core group of characters and are happy to find out how things have turned out for them after the traumatic upheavals in The Warden.

About five years have passed since the end of the previous novel, and we find kindly old Bishop Grantly on his death bed with his son the Archdeacon by his side. The Archdeacon loves his father but the old man has been in the process of dying for several weeks and the Archdeacon is hoping to be appointed his replacement as Bishop. It’s pretty much a sure thing unless a new Prime Minister and his party come in. That would mean the new gang of liberals would want to appoint a liberal clergyman to the post. The old Bishop hangs on to life just long enough for a new government turnover and the unfortunate Archdeacon loses his chance at the plum gig by moments.

The new regime appoints a certain Dr. Proudie to the post and into the cozy town of Barchester comes the new Bishop and his entourage, which includes the domineering Mrs. Proudie – “the real Bishop” – and his odious chaplain, the slimy social-climbing Mr. Obadiah Slope. This group belongs to the new evangelical, less traditional, wing of the Episcopal Church. It is strange reading a novel in which the liberals, who want things like Sunday schools for poor children and more inclusiveness in the church, are cast as the villains, but such is the case in Barchester Towers.  These people have scant respect for tradition and are perceived by our more conservative friends as vulgar busybodies. I found myself perfectly happy to root for the old guard against these obnoxious upstarts, even though generally I tend to sympathize with the oppressed masses. Mr. Harding, his daughter Eleanor, and even the Archdeacon, are just more likeable.

At the end of The Warden Eleanor Harding marries the young reformer John Bold but in Barchester Towers we find that he has, alas, died. It is apparent that Trollope never quite warmed up to John Bold, whose reforming zeal is the impetus for driving poor kind Mr. Harding out of his comfortable job as Warden of Hiram’s Hospital, the local alms house, so it is no surprise that he kills the poor guy off. Besides, Bold’s early death leaves Eleanor a rich young widow who is available for romantic adventures.

Also newly arrived in town is the bizarre Stanhope family. The father, Dr. Vesey Stanhope, is a clergyman who went to Italy to recover from a sore throat and stayed there for 12 years, allowing proxies to take care of his clerical duties. His three Bohemian young adult children, two daughters and a son, both charm and scandalize the town. Bertie Stanhope, the ne’re-do-well son becomes one of Eleanor’s unwanted suiters; but he causes her little trouble compared to the odious attentions of Mr. Slope.

Trollope uses some unusual narrative devices in this novel, from time to time allowing the authorial voice to interrupt the flow of the story. For example his assures his readers that we need not worry that “his” Eleanor will marry either Bertie Stanhope or Mr. Slope. She has too much sense to allow such a thing to happen. In the process Trollope clues us in to his philosophy of novel writing: in a good novel this sort of information should not interfere with the reader’s enjoyment. And indeed it does not.

The pleasure of this novel is in the perceptive humor and the characters, none of whom is perfect, but all of whom are either lovable or interesting or both. Trollope somehow makes even the scheming Archdeacon lovable. I think the secret is that Trollope really likes these characters and makes us like them too. In real life when we like someone we like them in spite of or even because of their imperfections. It’s that way with the Barchester characters. I found myself affectionately shaking my head at the antics of Archdeacon Grantly even though he is the kind of man I probably couldn’t stand in real life.

It is Archdeacon Grantly’s scheming that brings another key character into the story: the handsome intellectual Mr. Arabin, former professor of poetry at Oxford University, who, at Dr. Grantly’s invitation, accepts a position as vicar of a quirky local parish called St. Ewold. Mr. Arabin is a conservative and Dr. Grantly needs an ally in his political struggle with the Proudie/Slope faction. Mr. Arabin is also single, and as it turns out, rather lonely. So Eleanor Harding soon has a third suitor, this one much more suitable.

Other interesting characters are Wilfred Thorne, squire of St. Ewold’s and his spinster sister Monica Thorne. This pair are evangelical about preserving the tradition of their Saxon heritage. Then there is the poor clergymen Mr. Quiverful, his wife, and their 14 children, who desperately need Mr. Harding’s old post as Warden of Hiram’s Hospital so that the children can have decent shoes to go to church. And there are also variety of townspeople who get the light of literature shone upon them so that we get a glimpse of ordinary village life with its jealousies, its passions, and pretensions. I look forward to soon reading the third book in the Chronicles of Barsetshire series: Dr. Thorne.

← Classics Review: The Warden by Anthony Trollope
How to REALLY have peace on earth →

You've reached the Creative Space of Antiguan and Barbudan writer Joanne C. Hillhouse. Author of six books of fiction; and numerous short fiction, poems, and articles. Welcome. For info on my writing, services, and more, scroll down. If you need to contact me directly, email jhohadli@gmail.com. I update this space regularly; book reviews to news of my own books, #theWritingLife, and my CREATIVE SPACE column. Sharing with links and credits is fine but unauthorized use and/or duplication of site content without permission and credit is strictly prohibited. For my other blog, go to wadadlipen.wordpress.com